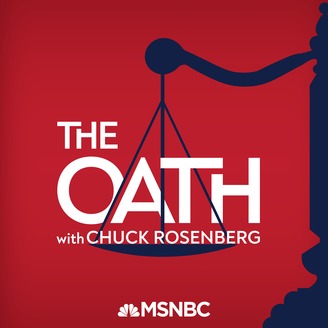 The Oath with Chuck Rosenberg, MSNBC’s newest original podcast, is a series of revealing, one-on-one conversations with thoughtful former American public officials from the highest levels of government service shaping this pivotal moment in American history. Led by MSNBC Contributor and former U.S. Attorney and senior FBI official Chuck Rosenberg, the discussions explore the experiences that shaped these leaders, what drew them to public service, the dilemmas they’ve encountered throughout their careers, and what keeps them up at night.

Jim Comey served as the Director of the FBI (until he was fired by President Trump), the Deputy Attorney General of the United States, and the United States Attorney for the Southern District of New York – at the very highest levels of the Justice Department.

A Yonkers, New York native, Jim discusses on The Oath his police chief grandfather, being bullied as a child, a harrowing experience as a crime victim, and how those experiences propelled him into a career in federal law enforcement, including as a mob prosecutor in Manhattan.

Former Forum Guest, Clarissa Ward, on her 36 hours with the Taliban