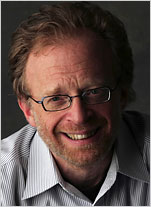 SAM TANENHAUS, Bloomberg Politics and Bloomberg View contributor, interviewed JOHN IRVING, author of The World According to Garp,
at the Kentucky Center on November 10, 2015.

Sam Tanenhaus is a contributor to Bloomberg Politics and Bloomberg View, and a columnist and associate editor at the British monthly, Prospect. He was previously on staff at The New York Times, where he was editor-in-chief of both the “Sunday Book Review” and the “Week in Review.” Before joining the Times he was a contributing editor at Vanity Fair, to which he contributed feature articles on politics and culture from 1999-2004.

His books include Whittaker Chambers: A Biography (winner of the 1997 Los Angeles Times Book Prize, finalist for both the National Book Award and Pulitzer Prize; and a national best-seller) and The Death of Conservatism (chosen by The New Yorker as one of its editors’“100 Favorite Books” of 2009). His articles and essays have appeared in The New York Times Book Review, The New York Times Magazine, The New Yorker, The New York Review of Books, The New Republic, Atlantic, Newsweek, Slate, Time, The Wall Street Journal, Washington Post, and many other publications in the United States and Europe.